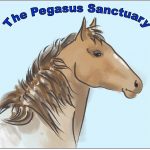 The Sanctuary rehomes equines destined for slaughter but there is, unfortunately, a never-ending supply. Almost all of them have been rescued as they are about to leave for abattoirs in Italy, a 3-4 day grueling journey without food or water, and being packed in too tight means they are immensely stressed and likely to injure themselves and each other. All sorts are sent from young and old to pregnant mares, the Sanctuary appeals for funds and homes for these equines that don’t deserve this fate but unfortunately have to buy them off the abattoir dealer to save them which is anything from €100 to  €1000. We ask for donations and/or homes as the Sanctuary does not have the funds to buy such a large amount of equines each month nor the space on the 10-acre site to hold any more than the 50 residents it has already.  The abattoir dealer who sends the Sanctuary details of equines to rescue may ask a higher price for more valuable horses and this is unfortunately not something we are able to control. Although it is frustrating to have to buy horses to rescue them we still feel that it’s better that the abattoir dealers have the incentive not to send some equines to slaughter and sell to rehome instead as it gives us a chance to give them a second chance at life.

There are a few reasons why equines end up being sold to the abattoir dealer, below is the list of more common scenarios of the equines we get through.

It is a misconception that all equines that go for meat are ‘useless’ we re-home around a hundred horses each year and around 20-30 of them are deemed ‘useful’ i.e ridable but there is more to them than riding, equines are absolutely amazing creatures, they can be so gentle and so funny and form such complex and deep bonds, we should all be able to love them for how amazing they are not just what we can make them do.

The Sanctuary has dealt with the local abattoir dealer for some time now and although we don’t support his job we trust him to send the ‘advertised’ equine although he only has the information the owners give him which can be uncertain but he does not send a different horse than described which some unscrupulous dealers do. The dealer now drops off the equines at the Sanctuary so they can be properly advertised by us and their temperament be described accurately although we don’t have the time or facilities to see if they can be ridden except for a quick sit on for some. The meatman gives us a few weeks now for us to find the funds and/or a home but if he isn’t paid he will take the equine back and he will send to the abattoir instead because that is his business.

Some owners selling to the abattoir specify that they do not want their equine re-sold, these are often people who would not appreciate their details being on the passport that goes with the equine being seen by others in connection with abattoir dealings, these are often racing yards, riding schools or showjumping yards. In these cases we must not put up publicly the pictures of the equines showing their distinguishable features or the abattoir dealer will get in trouble if by some chance they are seen (Which has happened a few times now). We do send them privately to people who ask so we can limit the likelihood of the previous owners seeing but we appreciate people wish to see the equine they would like to save. Anyone is also welcome to visit them at the Sanctuary.